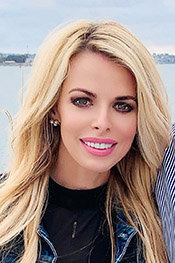 Hannah Jaime hails from the Walter Cronkite School of Journalism and Mass Communication at Arizona State University. Gannett named her a future industry leader with a career to track. After years as a multimedia journalist at NBC in Phoenix, she joined ABC in San Diego in 2011, where she was a military reporter.

While reporting on Helping Paws, the mission to save animals and support our troops grabbed her heart. She left the news industry and became their Executive Director in March of 2018. She’s since more than tripled their contacts, revenue and volunteer force.

She believes a pet’s unconditional love is invaluable for veterans with Post Traumatic Stress, depression and anxiety. She says it’s an absolute honor to help keep vets united with their furry best friends.

Hannah proudly serves as a Board Member for the San Diego Veterans Coalition, and their Physical and Emotional Health (PEH) co-champion in support of our fine veterans. It’s another way for her to give back to those willing to give it all. Hannah lives in Oceanside with her fiancé, a L.A. City firefighter, and their English Bulldog Miss Charlotte.